We play an important role in the terms of the news. We take pictures of things that happen and we later spread it out by sending it on facebook. We also might witness things that we will later have to tell to a news reporter. Without us the newspaper would have nothing to inform therefore losing its worthiness. 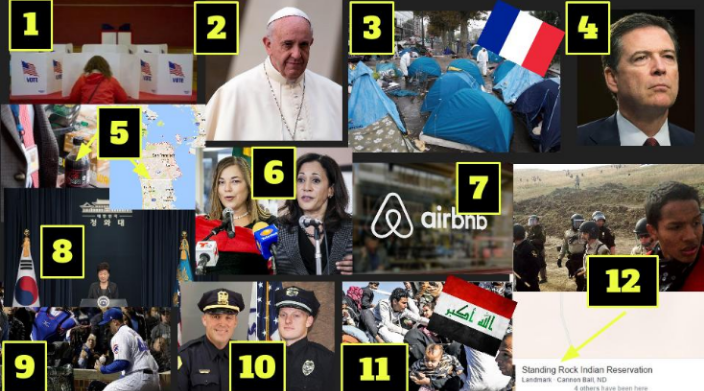 #1. Number one talks about the Electoral College voting for next Tuesday and about how the real results of the election will be out in January.
#2.  The Pope Francis says that girls may not become priests because God was born a man, not a girl.
#3. Number three talks about how French Police moved 4,000 people out of a Paris migrant Camp.
#4.  Number four is about how James Cormey's agency said that they had been looking over Hilary Clinton's emails.
#5. Coca Cola hired a a new leader in San Francisco and they also started to raise taxes on soda.
​#6. The US Candidate for Senate Kamila Harris is slipping away from Loretta Sanches.
#7.  Airbnb was being sued for discrimination against Gregory Sheldon who is African-American because they wouldn't rent him a hotel room because of his race. Airbnb has a big block towards being sued because of a policy declaring that users may not sue them.
#8. South Korea's president, Park Geun-hye, was involved in a major public scandal and she revealed her heartbreaking scandal to everyone.
#9. The Chicago Cubs end 108 year wait and win the World Series Title, beating the Indians 8-7.
#10. Two officers were killed in an Iowa ambush.
#11. Iraq forces were fighting ISIS on Mosul streets.
#12.  Obama pointed out that he found a way about the pipe line going to Standing Rock.
Powered by

Create your own unique website with customizable templates.
Daniel's Site